Recently, articles on the “actions” of Jahangir Hajiyev, the former chairman of the IBA, are published in large-scale articles. It is emphasized that the former banker has embezzled billions of dollars, damaging Azerbaijan to at least the First Garabagh war.

So what does Jahangir Hajiyev think about it?

The written answers I received to the former banker while still on trial were also clarified. For a discussion of the readers of Ovqat.com, I write a written interview that I have not published so far since my time is short of selling:

“Yes, IBA has funded a number of foreign projects ”

– In the last two years, Azerbaijan’s banking system shook and this situation is still going on. So far, 11 banks have been closed, and in some other banks, the situation has fallen. In the scandals surrounding IBA, the banking system is blamed on the processes taking place in the economy. Do you agree with this statement and what can you say about it?

You know, the economy has its own laws. The country’s banks are the blood-vessel system and mirror of its economy. At present, the system is broken. There are two main reasons for this. First, it is the most devalued and most devalued among the CIS countries without the creation of a non-professional, stable banking system, increasing its capital. Secondly, the banking system is an unprecedented intervention by law enforcement in any country. Today, law enforcement agencies manage the banking system almost with the so-called repayment of loans through collector function. However, in all the civilian countries, these functions, namely, disputes with economic subjects, are aimed at direct and indirect ownership of property, and so on. such measures are solved only in courts.

Thousands of businessmen, bankers, and their family members have been banned from leaving the country. Practitioners and prisons are full of business people. Believe me, I’m a witness of this: getting off someone’s business has become an ordinary job. The base has already been formed. These statistics are not only the criminal cases disclosed in the CM as fraud and embezzlement. The businessman’s neck is also “loaded” with drugs and weapons. Many remain in detention without a court order “until the issues are settled.” For this reason, according to the research conducted by the University of Lausanne, according to the Council of Europe, Azerbaijan ranks third with 246 prisoners per 100,000 population in 46 European countries. However, the average figure is 131 people.

All of these are the factors that make the economy of the blood-vascular system bankrupt. The banking system merely reflects this reality as a mirror and, as the most vulnerable sector of the economy, is exposed to shocks first. However, there are relevant decrees by national leader Heydar Aliyev against businesses and banks for interference by law enforcement agencies, and they have not yet been abolished. The banking sector should be governed by economic laws, interference with law enforcement agencies, arrests imposed on businessmen, and imprisonment decisions to the economy, including the banking sector. That is precisely why developed countries are sensitive to economic issues, and businessmen are not imprisoned. The punishment of the accused is determined only by the courts. We are arrested before, and then they start investigations.

For example, under Article 9 of the Criminal Code of the Russian Federation, the proceedings are terminated if the accused is fined for the preliminary investigation. Even if the plaintiffs are not paid by the court, the fate of the accused is left to the jurisdiction of the judges and becomes their source of income. In general, lawyers can do it well; our Criminal Code is a legitimate act that has the most decriminalization in post-Soviet space.

All I mentioned is only a part of the troubles that businessmen are facing. The banking system, while lending to business, is experiencing these problems with businessmen. That is why devaluation, dollar loans, pricing, and so on. the root of the problems should be sought in the state bodies regulating the business sector and, most importantly, factors affecting the financial and banking system.

– Recently, various opinions were voiced by parliamentarians and economic experts on the return of capital from Azerbaijan. What can you say about it?

-I watched articles going on in the press. MPs Yevda Abromov and Vahid Ahmedov raise urgent issues. Regarding the billions of dollars raised from Azerbaijan, I would like to say that in this issue we need to distinguish between two problems: foreign investment and legalization of dirty money.

The billionaire who was expelled from the IBA by an internet resource, formerly a spokesman for the Finance Minister, was falsified. Unfortunately, in spite of all the explanations we have made so far, this lie is sometimes played as a stamp. Yes, IBA has funded a number of projects in Russia, Kazakhstan, UAE and European countries. There are those who are successful in dealing with problems with market conjuncture. Other entities in Azerbaijan – SOCAR (State Oil Company of Azerbaijan Republic) and private holdings also engaged in this activity. This is a process that goes through globalization, integration into the world market, and diverfication. These projects are known and available regardless of who they are.

“Taxes are accumulated a few years ago”

Other types of money are the funds acquired and withdrawn from the country illegally. There are two ways to return the funds to the country: first, administrative, and secondly, to create favorable conditions for the country’s economy.

Looking at the experience of other countries, the first way is long and ineffective in terms of time. The second is capital amnesty. At the end of last year, the Bill on Amnesty was adopted at the Parliament. I do not know how efficient this is, but every taxpayer in the country knows that in the future, taxes will be accumulated several years ago (to fill out the tax plan of the current year) regardless of whether the company will function in the future, and when it comes to tax sanctions, it is clear that the sanctions are artificially inflated and the taxpayer does not pay 30% of the sanctions, but the remaining amount does not reflect the reality. At least you should take advantage of the experience of neighboring CIS countries – in Russia, Georgia, Kazakhstan, twice amortized capital amnesty, revenues were deducted and transferred to the bank’s turnover by paying the capital tax on dirty means. It brought additional capital inflow to the country’s economy and accelerated it.

Another issue, namely, the MP V.Ahmadov has repeatedly raised the issue about the compensation of the depreciation of the manat, compensation for depositors, who have debts on banks and foreign currency loans. Unfortunately, the Minister of Finance opposed this, prevented the adoption of the law. However, the perpetrator of the devaluation is not the banks, but the Minister of Finance. Nevertheless, considering the experience of the CIS countries, we can see that, for example, the damages of 1 million 700 thousand depositors, which were deposited in the banks up to 1 billion tenge in devaluation days, were compensated. This means 86% of depositors in the country. Similar decision was also made on currency loans. 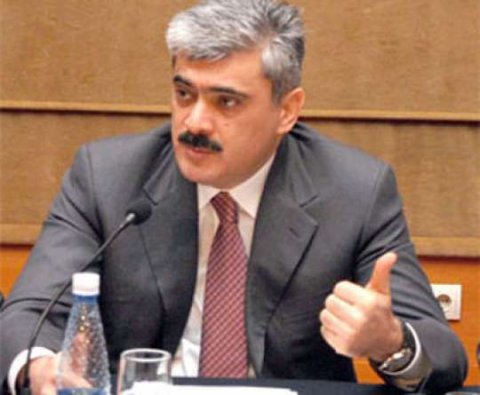 “Provocation, illiteracy, or both?”

The Finance Minister was accused of spying on three countries in the media, creating a crisis in the banking system and organizing a “black market” currency flow. You, too, have said this in court …

– Whether or not the Minister of Finance of the country is a subject of investigation of relevant bodies. In an interview with a former employee of the USSR State Security Committee, the kancret facts, company names, and bank operations are shown. Probably, so far, these facts could be disclosed to the public. Journalists also carry out such research in the Internet and information era. Looking at the professional activity of the minister, we can see that he has no economic, financial and banking education, only one project was working in the CBA (Central Bank) – interbank payment AZIPS system. In accordance with this payment system, manats throughout the country were, for some reason, via the International SWIFT system. SWIFT is overseen by foreign intelligence, as it has been featured in some foreign media. Imagine that, Azerbaijan, regardless of the amount of bank payers (even 10 manat), the money deposited by the bank went abroad and returned. And just as a result of the bank’s objection, a system called HÖNKS was created for small payments, such as an alternative to SWIFT, which contravened the national security and made the banks and payers more expensive, generally absurd. Since then, all payments have been made through the second system. The first one, the author of which was Samir Sharifov, remained in use.

During the activity of the State Oil Fund of the Ministry of Finance, information about suspicious transactions with foreign banks was leaked. His suspicious actions were once a subject of unofficial investigation throughout the country. Interestingly, the Fund was awarded an international transparency prize after the new head of the SOFAZ came to power.

Samir Sharifov’s activity as Minister of Finance was the successful operation of the Savings Bank in Kapital Bank, the bankruptcy of ABB, the devaluation of billions of dollars from the state by giving false figures to the country’s leadership, its role in restoring the “black market”, monopolization of the insurance sector creation and so on. his speeches were widely discussed.

How can it be that Azerbaijan’s rating (negative outlook) is worse than Armenia’s rating? After all, the economy of Azerbaijan is superior to the Armenian economy with quantitative and qualitative indicators. The Ministry of Finance is responsible for the country’s sovereign rating. This, at least, testifies to the incompetence of negotiations with international rating agencies.

I just want to ask you, referring to these figures and facts: what do you think Samir Sharifov’s actions are: provocation, illiteracy, or both? Find answers to these questions yourself.

– Do you know how to talk about what’s going on? The former prime minister was silent about why and at the same time he was facing these problems. The years he talked about was the IBA’s almost renaissance. Establishment of the best bank in the country every year and the overall pace of development in the official records of the creation of assets, income, capital, number of customers, access to the world market, membership to many international organizations, IBA Moscow Branch, International Insurance Company (which is closed today) it has been reflected. All this was personally confirmed by the Finance Minister as the chairman of the IBA General Assembly and his mission as the head of the IBA Supervisory Board. Therefore, evaluate such statements yourself.

But it’s not just past or present ministers who are involved in these accusations. During the Government’s report on the execution of the 2016 budget in the Milli Majlis, the Prime Minister also pointed out the actions of the former IBA leadership as the main prerequisite for the country’s financial and economic problems. What can you say about it?

-I myself have been trained to deal with the elderly at least with compliments and concessions. I am leaving my post in 2015, I have no activity for 2 years. The report was issued in 2017. Older people are sometimes able to confuse the days, months, or even years.

As for my activities, I have built dozens of factories and factories with ABB investments and created thousands of permanent jobs. Even the authorities responsible for the investigation admitted that 60-70% of the non-oil sector was created by us. In what years was the Cabinet of Ministers initiated the establishment of the enterprise? Look, it’s a big question. Because our economy is governed by the emotions and programs of the Presidential Administration and the country’s leadership. I have also witnessed an interesting fact; The most negative figures about ABB’s past management are for some reason, those who ask for a large amount of loans from their bank and their business interests.