As the expert stated:

If the Armenians do not make the right decision in the near future, most likely, Azerbaijan will have to use force and restore territorial integrity. This was stated by Echo.az independent military expert Uzeir Jafarov.

“We can not wait indefinitely until Armenians or their patrons solve this problem. Although the solution to this conflict is not so difficult, as some are trying to present, saying that there is no alternative to a peaceful solution” – he said.

I already wrote about military intentions, before that. Now Azerbaijan only confirms this. What also was confirmed by the report of US intelligence.

In particular, when talking about the possible resumption of large-scale military operations in Karabakh, Coates, as reasons that can make Baku aggravate, indicates the deterioration of the situation in the Azerbaijani economy, without even considering possible external factors.

And although the government of Azerbaijan is trying to say that it’s a lie, but reality refutes. The economy is in utter decay. Banks in the country are closing, filling for bankruptcy.  Moreover, all this is being presented to the people in a completely different way. Carrying out meaningless million-dollar events like Islamic Olympic games and Formula 1 just to distract the suffering people from the brutal reality. Infinite “bravado” in the news about how Azerbaijan is struggling with the “imaginary” threat both inside the country and the front line. But words must be confirmed by deed! And they do it.

As reported by Vesti.Az with reference to the press service of the Defense Ministry, on May 15, in the fuzuli-Khojavend direction of the front, the enemy withdrew to the new position the air defense missile system “Osa” of Armenia to provide control over air space.

With the aim of eliminating the danger to the aircraft of Azerbaijan and preventing the enemy’s activity, the “Osa” air defense missile system was completely destroyed along with the transport-loading machine. Supporting military unit was also destroyed. 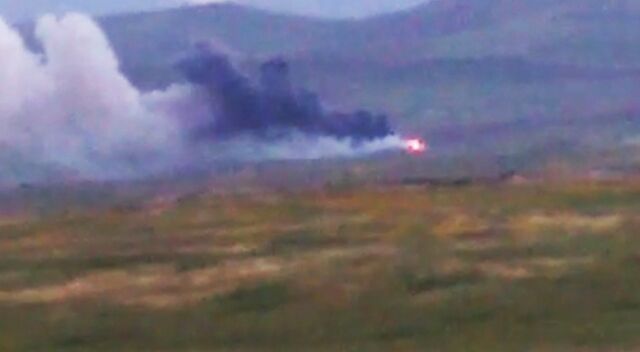 Well, it came to the point of direct attacks on the contact line. Azerbaijan hopes that there will be no answer. I highly doubt on that.

Any increase in propaganda in the news can only mean one thing. Azerbaijan is preparing to start full-scale invasion.

However, at the same time the words sound strange

Meanwhile, one can not doubt that such a cautious politician as Ilham Aliyev does not get involved in a fight, not having confidence in the powerful support from outside. He can take risks only if he has a guarantee that Russia will not take a direct part in the fighting. And such a guarantee, today, can sound more or less convincingly only from Washington.

That is, until there is a big brother behind (Turkey? Russia?), he will not attack. In this I also believe with difficulty. After so many publications in the press, there is a clear impression that Baku is ready for an offensive acts. Similarly, same things were happened in April 2016. Only this time the battles will be much larger and, unfortunately, there will be big losses.

How will it end?

I do not presume to predict as the result can be as simple, the cessation of combat actions, or even more serious as the invasion of one of the countries into the territory of another.