“We’re here affirming our First Amendment freedoms – rejecting Ankara’s violent efforts to enforce its gag-rule against American citizens,” said Aram Hamparian, Executive Director of the Armenian National Committee of America (ANCA), which organized the event in coordination with the Sheridan Circle May 16 Initiative (including many victims of the beatings), and a host of Kurdish, Armenian, Greek, Assyrian, and Christian groups including the American Kurdish Association (AKA), In Defense of Christians, American Hellenic Council, Armenian Legal Center for Justice and Human Rights, A Demand for Action, Hellenic American Leadership Council, AHEPA, and the Armenian Youth Federation.

“The idea that a foreign tyrant can come to the United States […] and allow his goons to beat up Americans on American soil is preposterous,” said Rep. Poe, who went on to call for the extradition of those charged with the attack.  “They need to have a trial and they need to go to jail, if they’re convicted. All of them – all of them involved in the assault.”  Rep. Poe, who had called for Congressional colleagues to join him in returning to the site of the May 16 beatings during the May 25 House Foreign Affairs Committee consideration of a measure condemning the crimes, was unequivocal: “The Turkish Government is responsible for that action, and they need to be held accountable.” 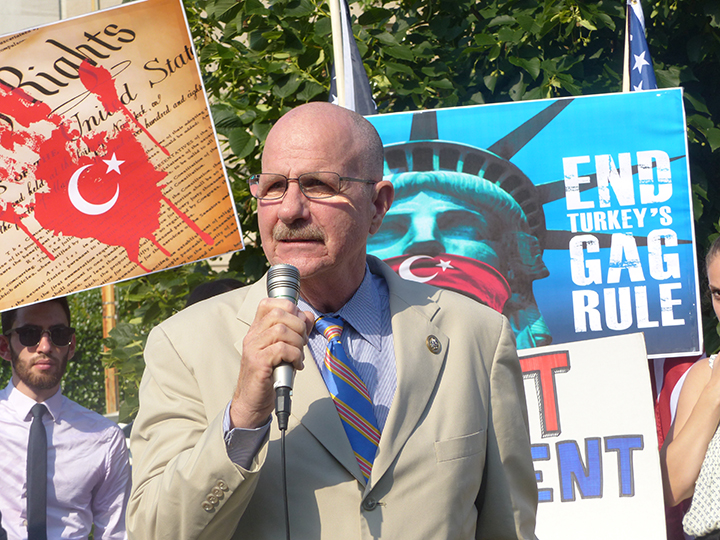 Citing the increasing repression within Turkey, Rep. Rohrabacher stressed that, “Erdogan beat people here… and the American people need to know this was nothing compared to the suppression and brutality that Erdogan is showing his own people in Turkey.”  He went on to send a clear message to Turkey’s authoritarian regime: “Until [Erdogan] apologizes to the American people for having his thugs beat up American citizens who are expressing their opinion, Mr. Erdogan should not be welcome to come back in the United States for a visit.”

Rep. Costa concurred, noting, “The Turkish government owes us an apology and more than that; those injuries that took place are a reflection of the lack of respect of human rights in Turkey today where literally thousands of Turkish citizens have found themselves imprisoned, found members of the press in jail, only for trying to protect their own views.”

Rep. Paul Sarbanes reminded President Erdogan: “in this country, under our First Amendment, under our constitutional democracy, we have the right to peaceably assemble.”  He noted that Turkey’s authoritarianism is nothing new for those in attendance of the protest – “discrimination, aggression, repression, (and) violence directed at the Kurds, at Armenians, at other ethnic and religious minorities, and of course there’s the shameful legacy of the Armenian Genocide.”

A number of victims of the brutal attacks spoke out in defiance of President Erdogan’s authoritarian tactics.

“As an American citizen, I was violated from exercising [my] first amendment right of freedom of speech,” said Sayid Reza Yasa, who lost a tooth, required stitches on his nose, and continues to suffer from the consequences of a concussion.  “I will never be afraid of them, but next time I go, I’ll take my hard hat with me, just in case.”

Ceren Borazan, who was videotaped in a chokehold by a member of the Turkish security detail, outlined the litany of ongoing repression in Turkey.  “A half million Kurdish people have been displaced,” said Borazan. “More than 5,000 politicians and activists arrested in just 2 years. Erdogan has jailed more than 150 journalists and closed over 200 media outlets. He has fired more than 5,000 academics and also shut down 2,000 academics. He also tells women how many children they should have, targeting women’s rights.”

A third victim, Lucy Usoyan, who is of Yezidi origin and hails from Armenia, reminded attendees: “We all have seen what happened on May 16th. Our fundamental rights as U.S. citizens have been threatened by Turkish government. President Erdogan, himself,  wanted to silence our voices, but instead he made sure that we have been heard worldwide.”

Hellenic American Leadership Council’s Michael Maragos noted: “The Greek-American community shared everyone’s shock when we watched when peaceful protesters were attacked by Turkish thugs on American soil. We were shocked but not surprised. For 100 years, Turkey has ignored the rule of law.”

The diverse group of community leaders were also joined by Fr. Sarkis Aktavoukian of Soorp Khatch Armenian Church, in Bethesda, Md., as well as by a Congressional aides, including those representing the offices of Congressman Brad Sherman (D-Calif.), a senior member of the Foreign Affairs Committee, and Congressman Devin Nunes (R-Calif.), Chairman of the House Intelligence Committee.

The July 19 gathering comes a month after Washington, D.C. law enforcement issued 18 arrest warrants – including a dozen against Turkish President Recep Erdogan’s bodyguards and two Canadians of Turkish origin. Two Americans of Turkish heritage have already been arrested for assault and various related crimes.  Hours after the arrest warrants were issued, the Turkish Foreign Ministry summoned U.S. Ambassador to Turkey John Bass and, according to a press statement, “emphasized that the decision, which clearly was not taken as a result of an impartial and independent investigation, is unacceptable.” President Erdogan later reacted angrily to news of these arrests, asking “What kind of a law is this? … If they [bodyguards] are not going to protect me, why would I bring them with me to America?” Erdogan vowed to fight the charges leveled against his bodyguards.

The ANCA’s Hamparian was video-taping live at the scene of the May 16th attack, which took place in front of the Turkish Ambassador’s residence where President Erdogan was scheduled to have a closed-door meeting with think tank leaders. Hamparian’s video showed pro-Erdogan forces crossing a police line and beating peaceful protesters – elderly men and several women – who were on the ground bleeding during most of the attack.

Hamparian testified before a May 25th Foreign Affairs Subcommittee hearing on this matter. Joining him at the hearing were Ms. Lusik Usoyan, Founder and President of the Ezidi Relief Fund; Mr. Murat Yusa, a local businessman and protest organizer; and Ms. Ruth Wedgwood, Edward B. Burling Professor of International Law and Diplomacy, at Johns Hopkins University School of Advanced International Studies. Usoyan and Yusa were victims of the brutal assault on May 16th by President Erdogan’s bodyguards.

On June 6, with a vote of 397 to 0, the U.S. House of Representatives unanimously condemned Turkey in response to the attacks, taking a powerful stand against Ankara’s attempts to export its violence and intolerance to America’s shores.  H.Res.354, spearheaded by House Foreign Affairs Committee Chairman Ed Royce (R-Calif.), Ranking Democrat Eliot Engel (D-N.Y.), House Majority Leader Kevin McCarthy (R-Calif.) and Democratic Whip Steny Hoyer (D-Md.), has received the public backing of House Speaker Paul Ryan (R-Wis.).  On July 14th, the U.S. House also unanimously adopted an amendment to the National Defense Authorization Bill, championed by Armenian Caucus Co-Chairman David Trott (R-Mich.), raising objections to a proposed U.S. sale of handguns for use by the very Erdogan security detail involved in the May 16 attack.

Over 100 Senate and House members expressed outrage over the attacks through public statements, social media, and a series of Congressional letters.

The May 16 protest in front of the Turkish Ambassador’s residence was a continuation of a demonstration held earlier in the day in front of the White House, co-hosted by the ANCA. As President Trump met with President Erdogan. human rights and religious rights groups were joined by representatives of the Kurdish, Yezidi and Armenian communities to call attention to the Erdogan regime’s escalating repression against free press, the Kurdish and other ethnic communities, as well as Turkey’s ongoing obstruction of justice for the Armenian Genocide.